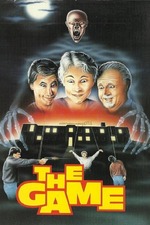 Bill Rebane(THE GIANT SPIDER INVASION,BLOOD HARVEST) directed this celluloid piece of major league suckitude that has a quintet of people playing a game at the manor of three elderly people who will pay them a million dollars each of they can survive the various ga,mes that are tossed at them,which include the likes of tarantulas running amuck in a room,a venomous snake swimming in a swimming poll,a dungeon looking jail cell,and a creepy looking cooridor,as well as the three elderly people in drippy looking masks tormenting one of the tied up,scantily clad female contestants in their game. It is all slow moving and boring,with no major plot hanging around the corner with the only scenes that consist of whatever kind of a plot exists being whenever the two gals are topless(with their bare breasts exposed),two of the male contestants chasing each other in the outdoors,and the climatic moment of the elderly trio being chased around by a ghostly figure that makes them meet their comeuppances. This film is majorly awful in every way possible. It was dumped onto VHS video during the year it was released.