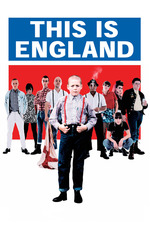 “If you ever want anyone to talk to, someone to cry with, or to just fucking have a hug, or punch the fuck out of 'em, I'm telling you - I'll be there for you. I won't turn me back on you, I promise ya."
It was beautiful to see the emotional depth and vulnerability expressed among men and young boys in such a caring and honest way. The scenes of unity among the outsiders and misfits was heartwarming in the beginning of the film. Run with the crowd, stand alone, you decide. It started off really light and fun, and then Stephen Graham's character enters and then the film’s dark tonal shift changes to aggressively conveying racial hate and misplaced anger.
This is England is an honest, brutal and raw depiction of the social and political attitudes of the working class in the 80s. It also does such a good job at capturing the heart of a coming-of-age story about a misunderstood boy still struggling with the loss of his father, who died in the Falklands War. The absence of Shaun’s father really exposes a yearning for connection and belonging among a group of other male figures in his life. This also leaves Shaun in a vulnerable position as a young impressionable boy exposed to the early 80s racist skinhead movement. The film authentically captures that whole subculture really well with the haircuts, clothing, shoes:doc martens, the girls caked on makeup and overall visual style. The music is fantastic and also effective in guiding the emotive shifts in the film. The superb performances by Stephen Graham and young Thomas Turgoose were really impactful, heartbreaking and compelling viewing.