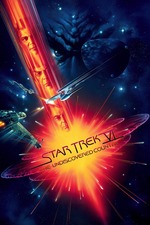 The undiscovered gem of the STAR TREK franchise. And, given the fact that the series had already succumbed to self-referential spoofing (THE VOYAGE HOME) and bloated pretension (THE FINAL FRONTIER), kind of a miraculous one.

It’s also the TREK film with the best balance of large-scale allegory (the Klingons in decline as Glasnost Soviet Russia), crew camaraderie (Spock and Kirk’s scenes pondering their increasingly intractable attitudes), and naval intrigue (with a sharp whodunit around a frame designed to make the Enterprise look like the instigators of a new war with the Klingons). And it’s even funny at times, without being silly or dumb.

THE UNDISCOVERED COUNTRY does look a bit smaller in scale than some of the other movies; given a reduced budget, director Nicholas Meyer shot most of it on redressed sets from STAR TREK: THE NEXT GENERATION (some of them pretty obvious). But in a way, that suits the movie, as it makes it feel more like a throwback to the original series that it’s paying homage to and celebrating one last time. And everything about the finale, from Kirk’s earnest monologue before the assembled peace conference, to the curtain-call cast signatures, feels right. A lovely, poignant sendoff.

(Also: This movie has maybe my favorite Spock line of all time, in response to Scotty crying "Then we’re dead!" Leonard Nimoy’s nonplussed reply: "I’ve been dead before.")