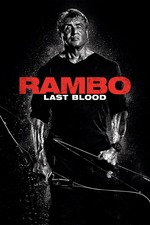 Last Blood's final act, more specifically, the closing showdown, is brutal, over the top, entertaining and a satisfying conclusion to the film. Unfortunately, Last Blood is riddled with so many problems; even an entertaining action battle royale finale couldn't save it. For most of its runtime, it's filled to the brim with genre cliches and not even the dorky ones that are entertaining, no no no, it's the stupid and eye-rolling ones that make up the most of this film. Every other scene contains cheesy interaction after cheesy interaction, and Stallone's Vin Diesel Esque mumbling didn't do the movie any favors. But the pacing is the most shocking thing about Last Blood. It's paced like a hot mess; at times it's too heavy on exposition (I'd say it takes 20min for anything plot-wise to happen), and then it moves way to fast, not providing us enough time process to what just transpired. It's one of those films where it doesn't understand at all what it's going for. And if it did, it certainly doesn't know how to get there.

Rambo deserved a better finale than this.

Castaway on the Moon