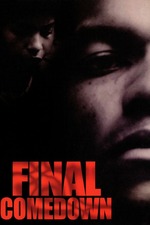 Black rebels pick up guns to deal with police brutality. The Final Comedown turns into an all out shootout. Lots of good dialogue from those who favor an armed revolution and from those against it. This movie is literally carried by its social commentary mixed with a lot of violence. I appreciated the hardcore approach it took on discussing racism, anchored by a furious performance from Billy Dee Williams. Everything about this movie is gritty and uncompromising from start to finish.

I also took note of the some of the music in this. The song "Father's Lament" by Grant Green is a big standout.

"They don't educate you in those schools baby, they condition you. That's their bag. And they feed you to the system to keep the machinery going." - Johnny Johnson