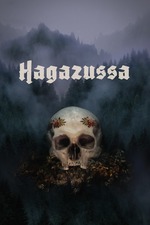 “It is digusting how all of you stink. Your rotten stench..”

The obvious comparison to make with this movie is to The Witch, which in my mind stands out as one of the best period horror films, or really period films in general, ever made. But Hagazussa stands on its own in some some aspects. The film certainly made choices, and pursued facets that ensured it would be, if anything, an original project. I can’t say all the choices worked out, but I do admire it for its willingness to stretch the boundaries and not deliver a cookie-cutter product.

One decision this movie makes is to take the “show, don’t tell” method of storytelling to its extreme. I want to say that, personally, I prefer a movie to occasionally clue me in to what is happening. I don’t need my hand held or anything, but when a movie goes totally experimental, like Hagazussa does, it presents some issues for me. Probably the most pressing issue is that I'm having to stitch together character motivations. The only thing I have to go on is what I see- I’m not really clued in to the inner monologues or thoughts of the characters. As such, when things happen, I’m not entirely sure why they’re happening. I can give an educated guess, based on what I’ve seen, but having to conjure up the plot myself kind of takes me out of the experience.

Complaints about the storytelling aside, I think this movie is a treat for the eyes and ears. Visually there are some stunning shots, and the forest setting lends itself to crafting scenes both erie and beautiful. The costumes and set designs look period-appropriate as well, though admittedly I’m not intimately familiar with 15th century German history. Sound-wise, I think the score is very understated, but when it comes in it really makes an impact. The haunting guitar riffs are nearly perfect for setting the mood. I also want to highlight the main actress, who I think does very well with a limited script, and delivers some effective non-verbal acting.

Some horror fans will appreciate the experimental atmosphere of this movie, some might get bored to tears. I think it’s worth a watch, regardless.