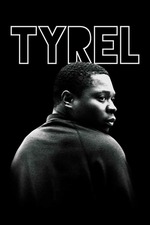 Hot take: Tyrel is more haunting than Get Out in that it viscerally explores the truly inconspicuous elements of racial friction in modern day America. This is not to knock down Get Out. Get Out undeniably works as an exaggerated satire, exposing the social ostracism that minorities (specifically Black minorities) confront with style and panache; but its sensationalistic, hyper-violent shifts mitigate its rawness and ideological potency. Sure, it still hints at real social divides and injustices, but its genre tropes and fantastical elements shrink-wrap everything in a more formulaic and desensitized kind of plasticized mainstream entertainment.

With Tyrel, we get a more naturalistic depiction of the genuinely insidious and disseminated nature of racism. Patiently, writer / director Sebastián Silva unveils the permeable, undefinable, implicit dissonance and animosities that can persist even in what appear to be amicable situations. None of Tyrel’s acquaintances exhibit overt malice or hatred toward him; to the contrary, they make halfhearted attempts at being inclusive, friendly, even inviting. But their obliviousness to the subtle psychological and emotional cues of Tyrel (emoted with understated brilliance by Jason Mitchell), and their dismissal of his seething anxieties, gradually transforms the weekend bro-fest into a hellscape of alienation, discomfiture, and claustrophobic unease.

Tyrel is so haunting because his spiral into madness so subtle. Stoic but unnerved, Tyrel refuses to lash out or lose his composure; instead, he goes inward, and roils with unease. And the diffusive disquietude that he feels, whether it is merely projected or environmentally justified, is palpable. It lurks in the background: intangible on a material / explicit level, and yet teeming in the ‘vibes’ and ‘energies’ emanating from each micro-aggressive offense, slight, and affront that Tyrel silently suffers.

And what makes Tyrel’s predicament all the more disorienting and tricky is that the hostile frequencies he finds himself sensitively attuned to are so deeply embedded in the grooves, octaves, and undertones of each smile, glance, and pseudo-friendly ‘ribbing’, that he cannot balk or directly call them out. The snubs, mordant asides, and camouflaged methods of harassment remain so slyly submerged beneath pleasantries and diplomatic gestures that to define or articulate a specific grievance seems absurdly impossible.

Through this believable ambiguity, Sebastián Silva incisively captures the invisible horror of feeling emotionally and personally exiled by the group. Tyrel's sense of marginalization is too generalized and ambient to pinpoint. And yet, by the end, the audience empathically feels as ‘gaslit’ and disturbed as Tyreld does: suspended in a dizzied, quasi-schizophrenic state of hyper-paranoia having spent an entire weekend getaway bombarded by ubiquitous yet indescribable indignities.