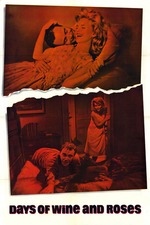 Days of Wine and Roses

When this film was released, I was only eleven years old, too young to see it in the theater. However, I do recall the advertising with Jack Lemmon. It must have been on TV or a trailer I saw when watching another film. I'm also pretty sure my parents went to see this, and I know they owned a record album that had the Henry Mancini/Johnny Mercer Oscar-winning title song on it, although I don't remember if it was Andy Williams singing or Perry Como.

Jack Lemmon plays San Francisco P.R. man Joe Clay in a romance with Lee Remick as executive secretary Kirsten Arnesen. Both actors received Oscar nominations for their leading roles in this study of the devastating effects of alcoholism -- a rather surprising theme for Lemmon as well as for director Blake Edwards. They are certainly better known for comedy,

Supposedly Clay drinks because it's part of his job, boozing it up with clients. He gets tea-totaler Arnesen to imbibe by plying her with chocolate-tasting Brandy Alexander cocktails. Almost before you know it, the two are married and have a daughter named Debbie (Debbie Megowan). But Joe's drinking causes him to lose jobs, and Kirsty takes up self-medicating during the day. It's a rapid descent into their own personal hell.

Eventually realizing they are hitting bottom, the couple hop on the wagon. To help them stay sober, they move in with Kirsten's father (Charles Bickford), where Joe can work in the family business, a nursery for trees and flowers. But after two months, Joe figures they've earned the right to cheat a little and have a bit of whisky. Of course, as any alcoholic can tell you, even one sip can be the start of an uncontrolled bender, which is exactly what happens in one of the most gut-wrenching and depressing scenes of the entire film.

After drying out in a hospital, much of his stint locked up in a straight-jacket, Joe meets a reformed drinker named Jim Hungerford (Jack Klugman), who becomes his sponsor at Alcoholics Anonymous. Joe tries to get Kirsten to go with him to AA meetings, but she refuses, relying on willpower to keep from drinking.

As might be expected, Kirsty slips off the wagon. Bored and unhappy, she goes on a drunken jag lasting several days and wants nothing to do with "Sober Joe, the milkman's friend." Convinced that the only way to get her back is to join her, Joe starts drinking again, too, leading to more cringe-worthy behavior.

In short, this is a thoroughly adult film, and it gets ugly at times, so don't look for a typical "Hollywood ending." I'll admit I teared up in a couple of places, feeling the deep love that's being destroyed and watching a child lose any chance of a happy home. Sadly, this was the reality for many families behind the facade of prosperity in the late 1950s and early 1960s, and I suspect it will still seem unsettlingly familiar to viewers today.