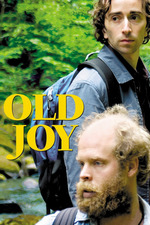 Writer-director Kelly Reichardt based this film upon Jon Raymond's 2004 short story, which was later collected in his anthology entitled "Livability: Stories" (2008). Veteran actor Daniel London and singer-songwriter Will Oldham star as Mark and Kurt, two friends who reunite to go camping for a weekend in the Cascade Mountains east of Portland, Oregon.

Mark's wife Tanya (Tanya Smith) is in the third trimester of her pregnancy with their first child, and he's quietly stressed out about impending fatherhood. He meditates as a means of dealing with his apprehensions, but a little alone time out in nature with his buddy seems like just the calming respite he needs. Of course, en route to the "hidden" hot springs that Kurt says he knows, the guys take a wrong turn and end up spending the night in the woods near a trash dump. But they are troopers and make the best of it.

For distraction amid the solitude, the guys have brought along Mark's dog Lucy, a cooler stocked with beer and a pellet gun. They build a fire, talk about their lives and spend the night in a two-man tent. In the morning, they stop for breakfast as a roadside diner and waitress (Robin Rosenberg) helps them with directions to the hot springs trailhead. After some hiking through dense green woods, they reach their destination, totally deserted as Kurt predicted, and settle in for a long, relaxing soak, cans of beer in hand.

Reichardt generously shares the tranquility with us, using the sound of flowing water and birds chirping in the surrounding trees to set a soothing atmosphere. But all good things must end eventually, receding into "worn-out joy" as Mark returns to his world of politics, work and responsibilities and Kurt resumes his rootless hippie lifestyle, living hand to mouth. The film won Reichardt several festival awards and confirmed the director's early reputation as an indie filmmaker with a bright future.