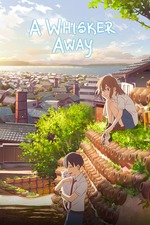 Normally when people grumble "Well, if you reversed the genders on this dynamic, people would complain," I shrug it off as irrelevant — yes, all stories look very different if you swap the ingroup with millennia of power into the role of the outgroup or underdog. So? But in this case, it might actually hold water. Muge has a crush on Hinode, who seems indifferent to her — so she sexually harasses the hell out of him, bumping his ass with hers every day, begging him to record messages on her phone so she can listen to them before bedtime to give herself amazing dreams, and nonstop begging for his attention and affirmation. When she doesn't get it, she takes advantage of a magical mask that turns her into a cat, and launches a separate relationship with him as the beloved pet he trusts with his secrets. It's pretty cringey, and the fact that the story is about her learning to be more considerate about other people's feelings doesn't make the opening hour any less uncomfortable.

I liked the animation here, and the whimsy, and the Ghibli-esque places the story eventually goes (with some pretty strong echoes of The Cat Returns, and an enjoyably freaky villain), but it was hard to get over fundamentally not liking the protagonist, who really is a stalker, as her best friend rightly points out. Fundamentally this is a Judd Apatow style "flighty character acts like a jerk a whole lot until it's time to grow up" comedy-drama, and I generally don't like the protagonists of those, either.