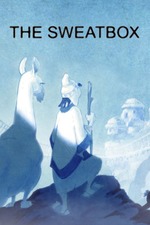 While Sting was working on the soundtrack for Disney's The Emperor's New Groove, his wife was making a behind-the-scenes documentary about the film's development and his working methods. Then Disney execs utterly rejected the film after multiple years of work, the team had to go back to the drawing board, Sting's songs were mostly pulled from the radically rewritten script, and he was asked to create MORE songs for a movie that had moved away from everything that interested him about it. Naturally, Disney never released this doc, but it wasn't hard to find on YouTube. And boy, for someone who knows the movie, this is fascinating. It features cut songs and never-released animation from the original version of the movie, and gives a sense of what the film was originally about — a Prince-and-the-Pauper drama starring Owen Wilson, with a much more familiar Disney animation style. The lack of contextualization hurts the story a bit — when the original director leaves the picture, it's never commented on, and it's entirely unclear whether he resigned or was fired, he just disappears. But watching this film still feels like being in on a secret, and getting some juicy insider gossip. Plus Yzma's villain song, sung by Eartha Kitt, is a banger, and it's very much a pity that they didn't find a way to keep it in the final version of the movie.