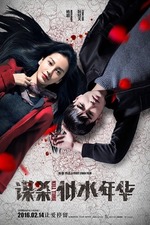 Pretty silly soap opera spread across decades of modern Chinese history, though mostly set within the past fifteen years. The romances early on are sweet, but wear out their welcome toward the second half of the film when characters' backstories are revealed. Curiously, the murder plot is never all that interesting. The frequent use of blue screens and drone cinematography is... admirably ambititious, though can be distracting more than engaging. There are some good uses of incredibly melodramatic music that I enjoyed in the second half of the film, but overall the score isn't terribly noteworthy. Really, the film's biggest problem is that it feels cheap and shallow. I get the impression the actors only did a couple takes and everyone moved on very quickly to the next scene. The actors are fine, to be clear, just a bit rushed. I could look past the cheap digital cinematography if it felt like there was more care in other aspects of the filmmaking, but I'm not so sure about that. Ultimately, it's not a bad film, but nor is it a good one. Perhaps that's the worst category --an inoffensively mediocre film.