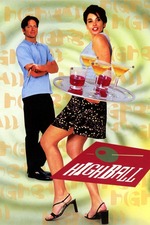 I was pretty into it at first but then the second act devolves into embarrassing nonsense and by the third act you don’t even know what the movie wants to be about anymore. The decision to paint the entire set a shiny dark blue was certainly an... aesthetic choice. Peter Bogdanovich’s presence is so bizarre. It’s remarkable that (granted, after 8 years) Baumbach’s next directorial effort was The Squid and the Whale, which is just so much more mature than his first three films, both in what it has to say and how it says it.

The production of this film intrigues me. I don’t know anything about it, but it seems (as evidenced by the pseudonyms in the credits) like Baumbach wanted to try something a little different and just do a really tight, single-location, one-week shoot with what I imagine was a very loose script, if any concrete script was written at all. As a fun experiment, who am I to knock it? But as a film, it doesn’t quite land, and I think the people involved know it.