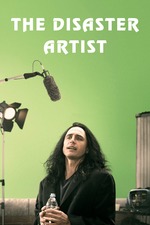 I saw this film in a theater in LA full of people who wanted to make something of their lives, packed it all up, and made the trek out here. I know this because there is a scene early on in The Disaster Artist in which Greg's mother is giving him the all-too-familiar condescending: "It's not that easy to just move to LA and make it" speech, punctuating it with the "maybe you aren't good enough". And there was an audible collective intake of breath from all around. And there was a united heartbreak watching Dave Franco's eyes as he endures that barrage in the greatest performative moment of true, unfiltered honesty in his career.

The Disaster Artist is about two people like everyone in that theatre, like everyone who felt their heart swell watching La La Land, like everyone who has ever imagined a bigger, more fulfilling life. Greg wanted to be an actor more than anything but couldn't get past his own self-doubt and self-sabotage until the mysterious wrecking ball of eternal catalyst that is Tommy Wiseau tore into his life and gave him the push he needed. They moved to LA to pursue that wild, unattainable dream and got beaten down by the harsh, cruel realities of a world that doesn't want them.

And then they made a movie. Not because they thought it would be funny to make a terrible movie or because they thought they would be filthy rich from it, but because they believed in it, and they couldn't keep relying on other people's disappointments to help them fulfil their dreams. Every person who came onto The Room started out believing this was something special. And Greg and Tommy just wanted to create something, to do the thing they had always dreamed of.

The film aches with the pains of pursuing your passions. I don't know if I can ever watch The Room again without crying now. It's crushing to see how seismically Tommy failed at what he was trying to do. One of his most widely mocked line deliveries is a straight homage to Rebel Without a Cause and he honestly isn't that far off from how James Dean brought it to life. No one who makes something believes they are making something terrible. Tommy worked as doggedly on this and put as much of his soul into The Room as Coppola did Apocalypse Now or Kubrick did any of his films. It just didn't work out for him.

But ultimately, it's a story for the dreamers. A passionate piece championing the uncertain artists of the world who still need that kick in the right direction, or who made the move but are starting to doubt they made the right decision, or who are running up against brick wall after brick wall after brick wall. The soul of an artist is a special, singular, lonely thing and the loud resentment towards artists is only growing. James Franco made this film not because he thought The Room would be hilarious to mock in front of the world but because he felt a connection to Tommy Wiseau in the same way that Damian Chazelle was speaking about himself through Mia and Sebastian. James Franco buried himself in this, in the performance and in the direction, and he brought to life something so blazingly honest and elemental, not to mention unceasingly hilarious. I think it's about fucking time he gets his due. He has proven himself repeatedly throughout his career but I think when Directed by James Franco comes up in the credits of The Disaster Artist, it's time to acknowledge his work, his artistic contributions, and his true, unblinking earnestness desire to offer up his soul for his work.