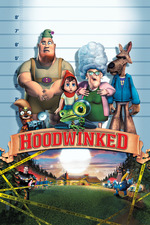 I can cut some slack on the animation if the writing is good. Or I can cut a bit of slack (but not much) on the writing if the animation is exceptional. Hoodwinked doesn't really get a pass either way. The animation is SO god awful that I had to stop watching and do something else as the rest of it played out -- listening to the dialogue. I mean, lack of budget or technology is no excuse for crappy animation. We've been doing this for over a hundred years -- there are methods and rules. Maybe these guys should have gotten some training.

But then there is the writing. If you don't give top notch talent good things to say -- then what's the point in hiring them? Warburton is the standout among them as the wolf. But if you compare Warburton's Wolf to...I don't know....anything else Warburton does (The Emperor's New Groove comes to mind), then its easy to see that its not a lack of talent on the talent's part.

Maybe I'm being too harsh. I'd like to think this was a learning process for all involved and it gave them a career. And now they make great movies! But alas...fate has dealt a strange hand and outside of the overblown sequel to this, the director has been delegated as a writer on Veggie Tales films and the mediocre Escape From Planet Earth.

Perhaps his next movie, Wish, will blow me away. Fingers crossed.