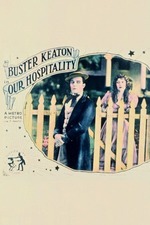 Second viewing, no score change. Revisited with the arrival of Lobster’s new 2K restoration - which looks fabulous, as expected, and blows away the grainy print I original saw - to confirm that this is still my favorite Buster Keaton picture [emphatic fist pump]. Not his funniest (SEVEN CHANGES), most bedazzlingly choreographed (SHERLOCK JR.), or iconoclastic (THE GENERAL), but surely his most tender and, in many ways, complete. A paean to the halcyon days of yore that hits doubly hard now. We are nearly as removed from this film’s release (1923) as it is from the period it’s depicting (1810), which raises the pastoral yearning exponentially, if inadvertently, romanticizing both the early-1800s and the early-1800s as caricaturized through the lens of the 1900s. (Had a similar somatic response to Welles’s THE MAGNIFICANT AMBERSONS.) Not the nonstop gag reel or stuntman showcase that Keaton pictures usually are - and I mean that in no way pejoratively - but that’s precisely why I cherish it so dearly. This film is to me what “The Purple Rose of Cairo” was to Cecilia; nostalgic escapism at its finest.

(Also wanted to note that the opening sequence, which lays the groundwork for the longstanding Canfield and McKay feud, makes superlative use of off-screen lighting [and, conversely, sheer darkness] to depict a nighttime thunderstorm in a way that’s frighteningly onomatopoeic.)