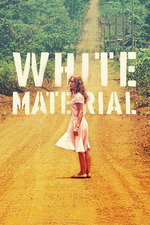 Can’t overstate the disparity between my love for this visually (gigantic) and my love for this thematically (almost nonexistent). Much of me admires what Denis is trying to do re weaving a quilt of white privilege, appropriation, and clandestine superiority, accentuated by the racial/cultural division that’s never directly addressed but unmistakably present, but the narrative proper - viz., the surrounding war, the doomed coffee harvest, the ex-marital strain, etc. - doesn’t latch in a way that makes Maria’s plight/dilemma feel critical or her reigning endangerment even partially justifiable. And I don’t believe the belated introduction of her off-the-rocker son does the trick. You can argue that the tragedy in losing your entire coffee plantation is obvious and that anyone whose livelihood didn’t depend on it would’ve jumped ship long ago, but Denis doesn’t do a particularly notable job of emphasizing the importance to Maria specifically, nor does she give us a practical reason to empathize with what eventually boils down to a case of unwarranted obstinance. But her form is nothing if not lights out; from the handheld mid-range shots to the uncomfortable closeups—aided by the strikingly delicious milieu of an unnamed African country—there was barely a second where I wasn’t glued to the screen, if only for the optic bravura. That, and the unassuming embodiment of quiet strength - however misguided and/or boneheaded - behind Huppert’s non-flashy performance. Could’ve done without the final act of violence, I suppose, but Denis was wise to keep the most gruesome bits off-screen.