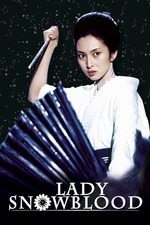 You were born for vengeance, poor child...

Meiko Kaji: *stares at something*
me: killin' it babe keep up you're doing perfect queen goddess reason why i exist

As someone who's obsessed over japanese cinema, female characters, samurai and whose favorite filmmaker is Quentin Tarantino... It was about damn time I'd watched Lady Snowblood.

What an absolutely wonderful movie.

It takes on the story of Yuki, a girl born in jail, said to be the child of the netherworld, carrying the burden of avenging her family's death. At this point, after having watched so many revenge movies, I'd think to have seen it all... Of course not. The tale of a woman seeking vengeance for a family she's never met. Vengeance as a duty. There are countless characters in all kinds of stories who are said to have been born for revenge, to live only for revenge... Not like Yuki. She literally lives for revenge. Everything she has ever done, from the day she was born, was aiming on that.

Her character arc is, admittedly, not a complex one, but the way it is developed is absolutely brilliant. The way the movie focuses not only on her ceaseless strive for vengeance, but also what happens when she faces the possibility of it being denied from her, how she relates to the world and ultimately, what happens next. What then? In certain ways, Lady Snowblood proposes a universal questioning of what is there to life after a life's supposed purpose has been served. What will we do after we achieve our greatest goal in life? What should we do? The movie poetically answers the question in an outstanding final scene that can only be remembered as one of the greatest endings in asian cinema.

Even if not as visually surrealistic as the Female Prisoner Scorpion series, Lady Snowblood is utterly poetic. Yuki herself is developed through metaphors, from her basis as the child of the netherworld to her conclusion in the film, and Toshiya Fujita's direction is spot-on on transforming the poetry of the script to image. The camera work is, both in technical and artistic aspects, one of the best I've seen in 70's cinema, using its frames to subtly evoke ideas in our heads, be it as in a single composition or through the repetition of such. The production design and art direction are the greatest aesthetic feature; the beautifully crafted settings - the simple iconic image of a snowy scenario where blood will be shed -, the costumes - Yuki's yukata like blank canvas to be painted with blood -, the special effects, the soundtrack - Meiko Kaji's voice gracing us with the theme song -, everything is just pure cinematic bliss. It's truly satisfying to see a movie that holds up so solidly to this day.

Kaji's performance is ever so powerful. This woman says more with discreet expressions than a book of expositive lines. Her eyes carry an incredible power - and Fujita sure knows to value that. She understands every layer of Yuki, from the ass kicking vindictive reaper swordswoman to the slightly dubious human being, she kills it.

The action is great, easily the best I've seen from classic chanbara jidaigeki so far. Fujita frames the excelent coreographies in a very personal level and never loosing the sight of entertainment. It's gloriously violent, blood gushing everywhere, filling the scenario like paint as life fades from the characters. That eye-candy kind of violence that we've come to love because of QT.

Lady Snowblood is an instant favorite. A beautiful, unique tale of revenge that shines through the ages. Every aspect in it exudes top quality filmmaking and storytelling. Aesthetically pleasing, poetically meaningful, and deeply efficient. Stunning, brutal, sad and ultimately fulfilling, it's a must-watch for any film lover.