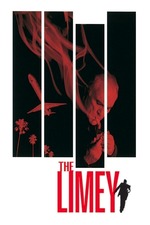 After the critical (not necessarily commercial, even though it’s a film that I doubt anyone couldn’t love) success of Out of Sight, Steven Soderbergh still needed to prove that his comeback wasn’t just a fluke. As described in his book Getting Away with it, his next project, The Limey, would be “Get Carter as directed by Alain Resnais.” And it would prove to be just as big of a success with critics, although even less so with audiences this time. It’s high on the list of his very best films, an elliptical masterpiece which doesn’t let its structure overwhelm the emotions at its heart.

Wilson (Terence Stamp) is a British thief who has just gotten out of prison to find that his daughter Jenny has been killed in a car accident in Los Angeles. Wilson wants answers, so he goes over to the States on a mission to find the cause of Jenny’s death. He meets up with some of Jenny’s friends, including Eduardo (Luis Guzman, who does his best work here since IMDb) and Elaine (Lesley Ann Warren). They point to Terry Valentine (Peter Fonda), a 60s music producer who was involved with Jenny at the time. From this point on, Wilson is on a mission of revenge against Valentine, and he will stop at nothing to make sure he pays for his crimes. And intercut are scenes of Stamp in Ken Loach’s Poor Cow, which function as Wilson’s origin story, and do so in a uniquely powerful way (I’m surprised more films haven’t used the “footage from older movies” idea, because it’s a great one).

The film as a whole functions as a memory. Not everything is remembered well. A conversation with Elaine unfolds over the course of many different locations. Scenes of Jenny are blown-out and surrounded by a haze. The structure of the film is obviously inspired by Point Blank, but while Point Blank feels like a dream, The Limey feels like we’re watching events as they’re being remembered. The structure’s used very poignantly, to emphasize the film’s emotions instead of hide them. And it is a very emotional film. Despite having the trappings of a revenge thriller, there’s something deeply melancholy about The Limey. Wilson may appear to be a badass, but he’s broken, first from being so far away from his daughter, and now from trying to deal with a life without her. When the reveal of her death comes, he’s stunned beyond words, and just walks away. It’s a punch in the gut to us and Wilson. And as a whole, it’s a film that’s not easily forgotten.

The Soderbergh Players: Luis Guzman previously appeared in Out of Sight, and he would play Don Cheadle’s DEA partner in Traffic. Nicky Katt appeared in this and Full Frontal, and is far and away the funniest part of both movies.

Cliff Martinez supplies a haunting, dissonant score here, his seventh for Soderbergh. Instead of Elliot Davis, Soderbergh used Ed Lachman as the cinematographer, and he would use him again for his next film, Erin Brockovich.