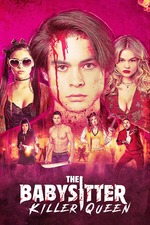 Two years ago, “The Babysitter,” a cheeky horror comedy on Netflix, was able to entertain me on a superficial level. This was about a young teenager who has to go through the scariest and cruelest night of his life when his sexy minder and her friends turn the peaceful night into an enormously bloody and satanic one. But he survived. Traumatized and without anyone believing him, but still alive. Now, two years later, he is confronted with the "evil" again, because on an unplanned outing with his best friend, the diabolical "babysitting gang" returns more bloodthirsty and vengeful than ever ...
“The Babysitter 2: Killer Queen” basically offers a lot what its predecessor had to offer - only with one to three shovels on top. Ok, not from the enchanting Samara Weaving, unfortunately the greatest strength of the predecessor, but much more from the rest. And that ranges from simple, technical things like the colors or the lighting to the splatter, villains or pop cultural allusions. If the predecessor was too fast and aggressive for you, you will hardly be able to get out of the anger here. And since part 1 often danced on the razor blade with style, taste, tolerability and coolness, it might simply be too much of the “good” for even more people. For me It was similar to the predecessor, but once again at a lower level. Sure, some jokes and allusions are already out of date and just make you shake your head, the "new generation" of killers can't keep up with the old ones and some gags don't ignite, seem rather warmed up and seen before, whether in the previous or other films. But at the latest when the old guard starts dancing again, the body juices flow in fountains, Robbie Amell turns it up to the maximum and our Cole finally "grows up", then you at least feel entertained (and the viewer can hardly expect more from such a film).
But again: I can completely understand when this quickly gets on your nerves and seems much too striking and bluntly hammered into it. Subtile is nada here. Sensitivity is a foreign word for McG. But it doesn't always have to. Not a film / franchise for the fine spirits, but for parties, teenagers and those who want to get a drink. I would be ready for and looking forward to a third part and the planned completion of the trilogy!
If you like Part 1, you can also have a party-like time with Part II. Still, the whole thing often seems a bit over the top, repeated, intentional and annoying. But actors (both the young and the younger ones) collect plus points from me, the once again enormously juicy blood toll and the clearly cranked 80s style. McG seems made for the Netflix audience ... But is that a compliment for anyone ?!