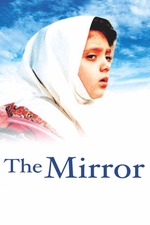 It's an idea for a film so simple in its provocation that I'd be surprised if it'd never been done before. There's something elemental about it, like an idea that's always been there in cinema but never quite been expressed so well or so effectively before (John Cage's 4'33" came to mind). A young girl, six or seven years old, has to make her way home from school after her mom fails to pick her up on time. She doesn't quite know the way, and maneuvers in and out of buses, cabs and crosswalks with the mostly ineffectual help of strangers. Along the way we see a cross-section of the city in its particular time and place (Teheran in the mid-90s), a kind of neo-realist city-symphony. But then, after 40 minutes, the girl looks at the camera and decides she doesn't want to be in the movie anymore and storms off. The film stock abruptly shifts and we see Panahi and his crew debating what to do next, a pseudo-documentary of a film production in a panicked moment. They let her go, while leaving her microphone on and follow her home, surreptitiously filming the girl's journey now in reverse as she in "real" life must accomplish the same tasks her character did in fiction.

It's a nifty gimmick and anchored beautifully by the performance of Mina Mohammad Khani as the girl. But that's just a MacGuffin for the film's true interest, which is the portrait of Teheran in all its cacophony and chaos. A dozen little stories spin around the girl (the young couple separated by the enforced gender divide on the public bus; the man who just wants his poor relations to dress nicely at his daughter's wedding) but mostly in the first half, the constructed narrative section. The people in the second half are more incoherent, their plotlines less clear, their characters not so cleanly delineated with cinematic shorthand. Some characters recur, including an old woman that throws a monkey wrench into even that distinction. We heard her talking in the narrative section, complaining about the lack of respect she gets from her children. When the girl meets her again in the second, she explains that she wasn't acting in the earlier scenes, they just paid her to show up and she made up her lines out of her own life. Fiction, reality: it's all the same. The important thing is to invest in traffic lights and make your kids memorize their home addresses.