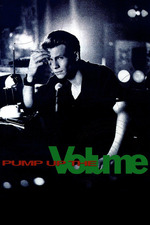 Call me crazy, but I think Pump Up the Volume is up there with the most perfect fantasies/connections any filmmaker has made to angsty teens. I understand people still see films like The Breakfast Club, American Graffiti, and Sixteen Candles as the pinnacle of teen dramas, and there's nothing wrong with that. But I think Pump Up the Volume needs to be in that discussion. It's an unabashedly over-the-top, preachy, and sometimes immature film, but that's a part of what makes it great. Whether you fit in with the crowd who believes in this movie's message or sees the film as more outlandish and overly 90's, there's still something for everyone. There can be that connection to the characters and the message, and there can also be a nostalgic or guilty pleasure vibe from it. It's funny how some films work like that.

I don't know what it is about this movie, and I know you're gonna tell me you've seen better, but it's just a gut reaction that not a lot of movies can get out of me. I can't say you'll have the same experience as me because this is one of those movies that grabs me because I can relate to Nick "Happy Harry Hard-On". I've dealt with shyness in front of women and large groups, and not a lot of people know my pain because I don't publish it all over social media. It's my bullshit and I'm gonna deal with it my way. And Harry understands that. When he speaks people listen and listen closely. They hang on every word because it takes a teen to know a teen (funny seeing as the director/writer, Allan Doyle, was in his 30's when he wrote this). And to have this platform where he can speak his mind and be this separate personality that can speak for him without anybody knowing who he is is something I think a lot of people want. Having the freedom to anonymously blurt out your opinions can be a beautiful thing. Or if you've ever visited 4Chan it can also be a terrifying and life scarring thing. It just depends on the person.

This is one of those movies that I feel like I will despise fifteen or twenty years from now. Because it's definitely a film that thinks it has all the answers and I can understand why people would think this movie gets a little too cocky at times, but I feel this movie understands teen angst better than any movie that came before it. It's a free spirit that flips authority the middle finger and tells you to stand up and say what has to be said.

Pump Up the Volume fills me with so many positive vibes that it takes a couple hours of jamming out to the soundtrack and gushing about it to whoever will listen for me to come down from the metaphorical high. It's a movie that grabs you by the balls and says that you may be messed up in the head, but so is everybody else.

So what is your go-to teen drama?