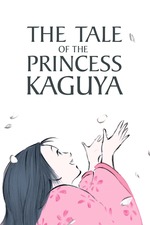 Of course when you mention Studio Ghibli to any animation fan the first thing that pops into their head is Hayao Miyazaki. Hell, My Neighbor Totoro is the company's logo. But we easily forget that Studio Ghibli was founded by four men: Miyazaki, Yasuyoshi Tokuma, Toshio Suzuki (producer of many Ghibli movies) and Isao Takahata.

Now Takahata isn't as highly publicized as Miyazaki because, as Takahata said himself: "Studio Ghibli was formed relying on the genius of Hayao Miyazaki to allow him to freely create his films."So Takahata wasn't meant to be a large part of the company.

And as you will find as I continue down this road of Studio Ghibli movies you'll learn why I'm not a big fan of his work. But every director has their magnum opus, and Takahata's is easily this movie.

The Tale of Princess Kaguya is his first film since My Neighbors the Yamadas in 1999. Both movies marked a drastic shift in Takahata's style. He once admitted that he doesn't draw well, and instead of improving the style he lowers the quality of the art to fit his style. And honestly it works perfectly for this movie. You can clearly tell what type of art they were mimicking in this movie with the watercolor backgrounds and charcoal and simple pencil lines for hair. The world of Princess Kaguya looks unfinished and what is finished looks extremely simplistic. But that's in no way a slam on the art style. You don't need hyper-detailed worlds like in a Miyazaki movie to be beautiful and suck us into the story. Sometimes you need to tone it down and keep it simple. And with a story like this it's aided by a mellow artistic direction. Nothing bold or wild is drawn. There are no striking colors, everything looks faded. But that all enhances the movie. The art style felt reminiscent of ancient Japanese drawings from the era this movie is set in and even the era in which the original folk legend was written in.

The story is actually taken from a 10th century Japanese folk tale called The Tale of the Bamboo Cutter. It tells the tale a bamboo cutter who stumbles upon a small girl growing inside of a bamboo chute. He takes her home and he and his wife care for her. Overtime she grows rapidly and gifts of expensive cloth and gold are sent their way to help shape this young girl into a princess.

We come to understand bits of what she is and what the purpose of her existence is, but we don't fully understand why she was birthed from a bamboo chute or why she has this destiny of becoming a beautiful princess or what this story is leading to, but it kept my focus with a story about greed, lust and the horrible, horrible things women of royalty had to endure in order to appear as beautiful and royal as possible.

Normally I hate the story of the main character wanting to tear down the archaic rituals of a family or establishment, but here I feel it works here. Women in Japan centuries ago were treated like dogs then. You think not being payed equally is bad? Try having to shave your eyebrows and have half eyebrows painted on, dying your teeth black and having your feet bound so they will stop growing. All of these things were considered attractive during those times. So yeah I can completely understand why a woman would want to rebel against these rituals.

I also love the father character, who is portrayed as a sweet and tender poor man, but who becomes corrupted by greed and loses sight of what his daughter wants. It didn't fell contrived, it's a gradual change that doesn't overpower the story and you get the feeling that someone so poor who comes rapidly into such wealth would get a big head about it and become absorbed into that lifestyle. Also am I the only one who was getting Uncle Iroh vibes from him?

You can feel a lot of passion and care went into this production and the final product is something beautiful, unique and touching to watch. I'm not even lying when I say that this movie is better than most Miyazaki movies I've seen. And that's something coming from a huge fan of the man's work. But it really is one of the best animated features I've ever seen. It blends all the elements of a good animated movie together in a way that you rarely see in this type of movie. I can't say enough glowing things about this movie and I believe if you can only see one Isao Takahata movie, make it this one.