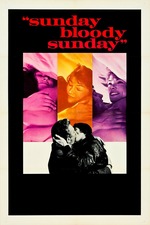 "There are times when nothing has to be better than anything."

Every single character in Sunday Bloody Sunday seems to have evolved beyond anything resembling pedestrian humanity and their notions of relationships. That's nothing to shrug at for a British film made at the start of the socially conservative 1970s. These men and women clearly all feel deeply but they do so with a wholly civilized measure of composure. They're poster beings created in the image of "Keep Calm and Carry On", dutifully navigating what for most of us would be emotionally turbulent waters. This can often make the film come across as a window into strangely inaccessible lives. Its forward-thinking queer-affirming representation of modern no-strings relationships is still very much intriguing, exploring what satisfaction really means when you get down to it. But that intrigue only goes so far. This unfortunately never climbs out of the pseudo-intellectual points its so set on making. The performances are nevertheless outstanding with Glenda Jackson and Peter Finch (who I loved in Network) proving more than up to the task of imbuing their characters with much needed warmth.

P.S. This is one of those movies that makes me so glad I can still tap into my inner child. Especially when the children in this movie themselves barely seem to be able to.