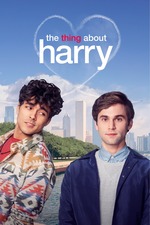 "We all got something to learn, I guess."

The Thing About Harry is that it'll make you cringe and roll your eyes as much as it'll scratch that vacuous romcom itch you get (and boy does it ever). This thing made me snort laugh and I can't tell if it even meant to or not. Thankfully, I'm familiar with Peter Paige's brand of uncanny valley relational drama (I've got most episodes of The Fosters under my belt to prove it) so I was able to enjoy this confection for what it is more than I probably would have otherwise. It's a movie that is so feverishly queer love-affirming (and love-affirming in general) that I can't help but want to root for it even with its obnoxiously unlikable lead character and its willful embracing of lame tropes. It's a box of donuts you'll no doubt enjoy consuming but will make you want to immediately try to undo the carbohydrical damage by going to the Criterion gym* as soon as it's over.

*Don't literally go to the gym, stay home and wash your hands instead!

P.S. This was my face throughout pretty much the entire thing, lol.
P.P.S. Freeform's point-earning commercial-skipping is such bullshit and their UI is awful. Don't use it if you can help it.

I'm going to start posting occasional non-movie updates just as a way of keeping a pop culture diary that I can look back on. So first up, I just started watching Westworld season 2 and I am intrigued. Thandie Newton and her character make the show for me and she's clearly going to be making some interesting moves this season so I'm eager to see more. On the music side, I've discovered that I'm a Yungblud fan. What can I say? He really taps into those early 2000s pop-punk concert vibes I was all about in high school. This quarantine has a guy feeling nostalgic...