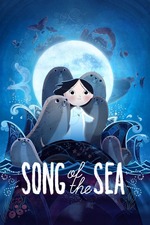 Song of the Sea

8/10
Always beautiful, always compelling, always charming, and always creative, it's a remarkably magical film. An ode to Irish folklore and culture, a meditation on loss, grief, redemption, and growing up, and one of the most beautifully animated films I've ever seen, it's an emotional modern fairytale about the importance of family and imagination for a child. There were a few aspects in particular I really loved: the music was absolutely beautiful, the animation was always very impressive, and I loved the ways in which the real world and the fantasy world of the story mirror and build off of one another. Filled with a number of really powerful sequences and a number of excellent characters, it's now one of my favorite animated films of recent years and of all time. An underappreciated gem of a movie that everyone should seek out.
Also, that moment when the characters start singing an obscure Irish folk ballad but you actually know all the words because your sister listens to weird music all the time...an experience everyone should have.