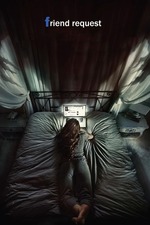 This film was brilliant.

This has kind of brought my trust in the horror genre back, I've been sick of the shit we've had over the last few years and I'm quite frankly sick of ghosts film, but oh my this film! I enjoyed Unfriended too but that's a review for another time. Friend Request felt like a very scale project, it's ambitious, it's creative and the director dares to do things new, there's moment where you're sat laughing thinking hahha jumpscare here, but there isn't and it catches you off guard around the corner, I absolutely loved (most) of the acting except for one scene that was just awfully done, but everything else was so well done, the direction was pretty spot on, it was quite gory for a ghost film, and the soundtrack was absolutely incredible, felt like it was ripped straight out of an 70s horror slasher flick! This film was something new, it felt different and I loved it, I'll be buying this on blu-Ray when it is released and I'll be looking out for this director in the future!