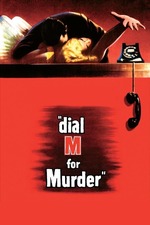 “Dial M for Murder” has a crime worthy of the more ingenious entries in its director’s filmography. Depicting a man who plots the killing of his cheating wife to gain her inheritance, there is a devilish thrill in the conceit alone.

There are whiffs of “Rope” and “Strangers on a Train’s” cyanide-flavored schemes in “Dial M,” along with relationship interplay reminiscent to iconic Hitchcocks like “Notorious” and “Suspicion.” “Dial M” somehow invokes the best works of its director, while being lesser than all of them.

It’s difficult to say what put the poison in the cool sip of champagne that is “Dial M.” The two most likely culprits: the 3-D, and the contractual obligation.

Hitchcock’s Warner Brothers contract obliged him to make “Dial M” for the studio before the agreement’s termination. Warners then also obliged Hitchcock to make “Dial M”… in 3-D.

Hitchcock claimed that he could have phoned in the stylistically forced direction of the film; and, he might very well have been better off doing it in a conference call. The 3-D demands limit Hitchcock’s distinct flourishes of blocking and composition. With ‘pop’ objects placed between lengthy two shots of characters in static conversation, the film even lacks the iconic facial close ups of Hitchcock’s other films.

Whether by technicality or ‘last day on the job’ passivity, “Dial M” has the intelligence of a true villainous mastermind, but an execution as sloppy as the crime depicted in its plot.