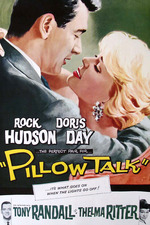 Director Michael Gordon saw other films use CinemaScope for epic battles and action scenes and said.... what if... we instead used it to show Rock Hudson and Doris Day playing footsie in the bath?

The knee-jerk reaction to Hudson turning down a Doris Day vehicle three times for being ‘too risqué’ is to chuckle at the stifled norms of the era. But the sheer amount of innuendos in “Pillow Talk” is so off the charts, it feels positively pre-code.

The film feels like 37-year-old Doris Day finally having her grand coming out gala; celebrated for being a woman of wit and physical confidence rather than an infantilised teenie bopper.

Hudson, too, in his first comedic role, ends up not shying away for a second from leaning all the way into the sexual under (and over) tones.

“Pillow Talk” was a studio rom com, sure - but it deserves to exist right under legends of the era like Douglas Sirk in appropriating pop imagery for its own intents. Sirk toyed with Mad Ave iconography to comment on agism, materialism and racism....

Who can’t help but stan for that style of social commentary?