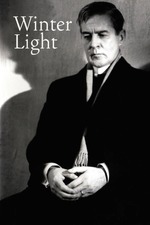 “Winter Light” is a cry out to God that reverberates back only as a hollow echo in a vacant cathedral.

Ingmar Bergman’s second entry in his Trilogy of Faith is marked by its emptiness. While the Almighty did not make a personal appearance in its precursor of “Through a Glass Darkly,” the absence was filled through familial affection.

God was present through love; however fallible that, too, can be.

In “Winter,” love is a word said only to an blank wall, a desecrated icon. It is difficult to judge which bears more pain; faith or adoration. Ultimately, it is only possible to say - life itself can bear nothing, except for constantly breaking one down to an essence of nothingness.

“Winter,” based on a conversation between Bergman and a priest who had related to the director about the suicide of a parishioner, will immediately be familiar to new viewers as the basis for Paul Schrader’s “First Reformed.” Despite the grimness of both works, “Winter” does come out the more dour on account of its unyielding minimalism.

“Reformed” hinted at the whim of escape through transcendence. Delusion through it might be, fantasy permitted an out.

“Winter” allows no diversion of suffering. Its lack of elaboration and ornamentation is not a mirror, however dark. It is a page in a Bible torn out - its text rubbed away to whiteness.