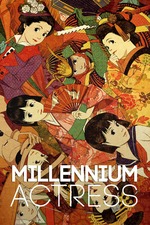 Fortuitously happened to notice that the remaster was screening, so I finally got to see this on the big screen for the first time.

Kon's central preoccupation was the porous boundary between the real world and the "imaginary" world that intersect and overlap with it. in Paprika, that imaginary world is dreams; in Perfect Blue, delusion. In Millennium Actress, it is film itself.

Kon doesn't so much blur the lines between the actress Chiyoko and the roles she plays as he cheerfully ignores them, telling her life story through her movies without telling us which of the things "actually happened". And then for fun, he throws on another layer, by having the movies themselves partially be imaginary re-enactments conducted by Chiyoko and the documentarians making a film about her. It's a testament to his skill as a filmmaker that none of this seems labored, forced or weighty -- he pulls off these virtuosity so cleanly, and with such good humor, that the movie can feel gossamer light at times. It's an illusion, of course.

One of the tricks that Kon pulls [I guess this is kind of a spoiler, but not really] is that the thinness of the central love story is in fact intentional, and part of the point of Millennium Actress (I have to keep using the proper name because "the film" could mean three different things). Chiyoko's pursuit of her long lost love, a man she barely knows, is, in fact a pretext that gives structure and purpose to the rest of her life, a fact she herself realizes in the end. She tells herself that she only got into acting to find this man, that she never cared about the movies themselves, but as Millennium Actress illustrates, the movies *were* her life on multiple levels.

Millennium Actress reveals itself to be a kind of mystery story -- there is the mystery on the surface -- who is the man and what became of him? The film explicitly supplies this answer. The second mystery -- what was Chiyoko's life *about* -- is withheld. And I love that I still don't know what the answer to that question is.