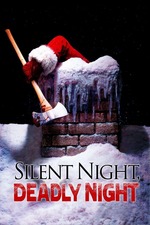 The horror is about as schlocky as you'd expect from a movie about a slasher Santa Claus, but I'm impressed with how well they handle the killer's tragic backstory. I think it'd be easy to simply demonize a character like this and play him for laughs, but the movie asks that you take his trauma seriously and turns a simple Christmas slasher film into a classical tragedy (even including a foreboding Oracle in the form of the killer's grandfather).

In addition, the synth based horror score is a perfect fit for this film, as are many of the more 'traditional' Christmas songs written to accompany this film like "Santa's Watching" and "Slayrider," whose lyrics and mood fit the uncanny Christmas horror this film works to achieve.