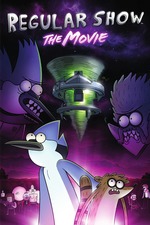 I freakin' love this show. I love how rooted in the mundane it is all while being so empowered by a fantasy overtone. The random factor isn't set to overkill like most other CN productions these days and the art style, while not terrible, is still unique enough to allow room for respectability. I can explain more and more about what I love about this series(like how its basically just college student problems explained in the only way kids would truly appreciate it, by fighting a demon by the end of the episode instead of simply talking things out), but instead, I'm going to elaborate on why this review isn't credible whatsoever.

I'm admitting this right off the bat. I love this show. A show many people don't. I'm bias as hell toward this, because it was basically an 80 minute episode. That's all. The format, art style, pacing and writing are no different than if it were any other episode. That's not a bad thing... to me. But I can see how other's would be turned off by that. IMO, don't fix what isn't broken... Unless your Skips, cause that's what he does.