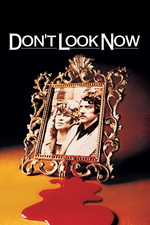 After "The Man Who Fell To Earth," this is my second Nicolas Roeg film, and one I've been wanting to see for a long time. I finally found a Criterion copy and was able to experience it, and amongst all of its strong visuals, interesting cutting, and slight ambiguity, I was a little underwhelmed. The opening scene of death is very powerful and unsettling, and I appreciated the commonplace nature of that weird love scene... in fact, I was really intrigued by at least the first half, and trying to look for clues for what weird things might be coming up.

Then, when Julie Christie left the scene, I found myself increasingly impatient, waiting for something else weird to happen, and hoping the ending wouldn't be too obvious. I had heard something about a certain object used at the end of the movie, and was hoping that what happened wouldn't be too straightforward, but it was exactly what I thought it would be. And as the protagonist runs closer and closer to his inevitable character ending, I was no longer interested. I just wanted things to be weirder, or for the film to pick up its artsy-ness again. But things seemed more obvious, the horror wasn't shocking to me, and I didn't really care anymore. It's a shame, because there's so much of an artistic voice in this film, with some very unsettling scenes, off-beat music, and interesting performances.

I feel that upon my first time seeing this, I'll just have to be content with not caring. Once I get over not liking the plot and not being excited, I can go back eventually and analyze the smaller things, and hopefully appreciate Don't Look Now a little more.