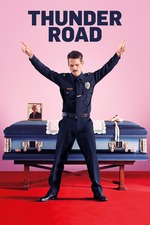 “Thunder Road” is the one man show of Jim Cummings, who is writer, director, co-editor, composer, and lead actor of the film, and while I didn´t know him before, he is definitely on my radar now.

The fantastic one-take opening sets the tone for the whole movie, balancing awkward comedy and emotionally affecting drama in an impressively effective way. “Thunder Road” follows Jim Arnaud, a father and police officer, who suffers a mental breakdown caused by the death of his mother as well as the divorce from his ex-wife and the resulting custody battle over his daughter. The film deals with heavy themes such as death, grief, depression, loneliness, regret, self-pity, feeling of inadequacy, and fear of the future, but it also never forgets the humor. I often laughed and teared up at the same time.

The movie is carried by Jim Cummings phenomenal lead performance. It´s eccentric, enthralling, and one of a kind. It sometimes boarders on campy, but at the same time, it´s raw, real, and resonating. Especially the father/daughter relationship hit me in the feels.

Jim Arnaud often acts pitiful and cringey, but ultimately, it´s an empathetic portrayal of a hurt and vulnerable man who tries his best to get his life in order and be there for his daughter but struggles with several mental issues. It´s a bizarre but also intimate and humane film that hits close to home. A gem of a tragicomedy that comes highly recommended.