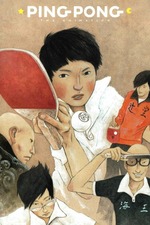 In my Mononoke review, I stated: "I doubt I'll be coming across anything quite this jawdropping any time soon".

Ping Pong the Animation was directed by the great Masaaki Yuasa and is the official anime adaptation of the word "Passion"--as well as the original 90s manga, of course.
Everything about this show revolves around this concept.
"Passion".
"What is your passion?"
"What brings out the passion in you?"
"WHO brings out the passion in you?"
Perfectly illustrated by how it chooses to focus (not just address, FOCUS) on many different Ping Pong players and the ways each one perceives, and relates, to the titular sport. As said in the show: "Who do you play for?" Sure, there may be the two REAL main characters, Smile and Peco, but the show still manages to go out of its way to flesh-out everyone who seems to be in any way "important" to the narrative (One random, seemingly expendable, dude loses once and, instead of having his story end there, we constantly get glimpses of where he chooses to roam after said defeat). Touches like these are what made the narrative feel so real and touching the whole way through. I mean, THAT and all the visual metaphors that are thrown in for good measure so as to help make the feelings involved feel that much more palpable (the most prominent ones being The Robot and The Hero).
Plenty were the times where I found myself drowning in tears, be them from sadness or from pure untamed JOY--all of it being achieved in less than 5 hours, mind you.

Now, I could easily end this review here and call it a day, but... That'd be doing a HUGE disservice to all the staff involved.
Every facet of this production seems to have been meticulously crafted into a most beautiful whole, thanks, in no small part, to the great Masaaki Yuasa himself.
The OST was incredible, the voice acting was impeccable all around, the pacing was "yo mama's PUSS" levels of tight (assuming it's still tight) and the visuals... Oh, mah boy, the visuals. They may turn some people away at first but they have at least three major points in their favor that completely invalidade any "supposed" faults anyone could see.
First- Objectively, the animation looks super fluid.
Second- It's intentionally like that so it can stay close to the original source material.
Third- It looks unique amongst this sea of same-y designs and styles we seem to be getting.
And a surprise fourth reason:
It strengthens the inspirational message it aims to achieve. Having it look this "cheap" and "unprofessional" automically makes the overall product look like an underdog in and of itself. It's like something ANYONE could draw. A 5 year old, with enough practice, could probably draw something similar to this, so maybe YOU could--maybe--get this far one day too.
(Ok, the proportions are way too precise for just anyone to replicate... But the illusion's still there).
I try imagining this as a normal looking shounen and I (no joke) cringe.
What we have is great. What we have is special. What we have is near perfect.
What we have...
Lets us fly.