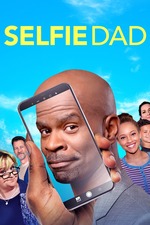 Have you ever drunken distilled water? Distilled water is water that’s been boiled down to the point that there are virtually no nutrients. After watching Selfie Dad, I can't help but feel I watched the equivalent of drinking distilled water.

Dave Marcus (Michael Jr.) is an elder man down on his luck and in dire need of a change in his life. After seeing some of the videos his son watches online, he decides to create videos of his own of him clumsily try to put things back together. As he becomes a viral success, his relationship with his family becomes strained over time along with his job.

Christian faith based films have the issue of either being extremely corny or the obsession of putting the faith above the story and Selfie Dad does both. There’s an extended conversation between the son and the father where they literally spell out for the audience how youtube and other social media moguls have been able to be successful, but Selfie Dad tries so hard to make you believe that this mans videos would help him gain thousands of views in a matter of days, which is just plain unrealistic for the subject matter.

Michael Jr. tries his hardest to be the everyday man but I feel like acting and writing-wise, he just bumbles his way through the whole movie looking for a laugh that never comes. The film doesn’t really have an arc of why he should renew his faith or even why his faith isn’t there in the beginning over than for the sake of he should. And Kappa Studios, the production company for this film, gets the award for the most cynical product placement in a movie for being the place that he works at and you see the logo everywhere.

It’s hard to really hate Selfie Dad, but it’s hard to defend it as well. It’s not really funny, yet it has the nerve to drop a “you know, I don’t really like Christian movies” but is guilty of all the things Christian movies have done. A good Christian movie is capable of existing, but it has to get out of its own way and tell a balanced story. It’s just this isn’t one of them.