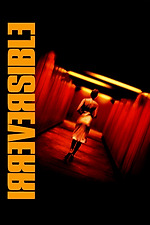 "Take the underpass. It's safer."

Boy, oh boy, oh boy. I've been dreading watching this movie and actively avoiding it for some time because of "that scene." I knew it was a movie that was hard to watch and almost sickening in its delivery. I know that this is one of the more divisive films out there and notorious for its ultra-realism and, some say, perverted and shameless nature.

I will say that, for the first half of this movie, I absolutely hated this film. I felt like I wanted to vomit. Gaspar Noe's filmmaking style, in general, is atrocious. His spinning camera doesn't serve as a stylistic touch but instead gave me motion sickness, throwing me into a disorienting spiral of visual awfulness. I didn't like anything about the first half of the movie: The sets, the characters, the repetitive lines, the disgustingly free use of profanity. Everything about the first half was ugly to me, and I considered turning this movie off and ending it right there....

And then "the scene" happened. I don't think I was ready for how ultra-realistic it was. It completely shocked me, which is, I guess, the whole point. For those who don't know, a woman is viciously and mercilessly raped and, thanks to Noe's choice of taking very long takes, the viewer cannot hide from the heinous act depicted on screen. It's, by far, the most uncomfortable, dirty, shockingly violent act I've ever seen in a movie. Noe simply forces the viewer to watch this almost 10-minute ordeal play out. At that point, I couldn't take it any more.

Thankfully, the battering ram that is the first half of this movie gives way to a more palatable, almost whimsical slice-of-life second half that I somewhat enjoyed. The movie centers around the rape but it is told from the perspective of the victim (Alex), the victim's boyfriend (Marcus) and his friend (Pierre). The story is told in reverse and it took me a little while to pick up on this fact and I was left scrambling a bit to piece together the post-rape events since I checked out a bit during the vomit-inducing first half.

What we see in the second half closely resembles a light relationship drama where we see the couple interacting with each other, with Pierre and with other friends in a party scene. These scenes, I thought, were pretty effective and served to make me care a little bit more about the characters in the story. I think Monica Bellucci and Vincent Cassel, who play the two lovers, have generally good chemistry in this movie and it made scenes between them the most enjoyable parts of the movie. There are some things in the second half, like some blatant foreshadowing and interesting commentary on fate that are interesting to pick up on and relate it to what we've just seen.

But just when I was warming up to this movie, Noe slaps on an enormously jarring ending that is as cryptic as it is frustrating. It's as if his aim was to at first shock us, then endear us to his characters and then intentionally leave our heads scratching and questioning his sanity as a filmmaker. This movie put me on a rollercoaster of emotions that really turned me off.

My overall opinion is that this is not a good movie. It's narrative structure, while a bit derivative, serves the story in a so-so way but the entire experience was one big, jumbled, visceral, inconsistent experience that really felt like more of a chore than anything.