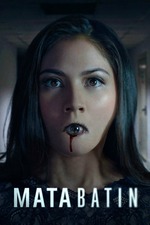 okay, i was worried that maybe this only squeezed four stars outta me yesterday bc it came at the end of a very deep netflix hole i’d fallen down, and by the time it started i was so distracted making my dog’s medical cone into a flower i wasn’t even paying attention for the first twenty minutes and had to restart. by that point i was so over it with all the garbage i’d seen, for this to even be halfway decent i was gonna be grateful.

showing it to my roommate again today tho, it held up!! the jumpscares obviously can’t get you twice, but there were lingering creepy moments (the elevator) as well as just really well done Classic Spooky Scenes TM (the little girl in the hospital) that still worked so well even though i saw them coming this time. jessica mila is a fantastic lead, and alia easily could’ve been a rly flat character without her. i don’t wanna spoil too much, but this also goes well beyond any standard haunting/possession type thing. the finale in particular was unlike anything i’ve seen before. it’s also satisfyingly violent in a way mainstream american horror is too chicken shit to ever be, but not to such an insane extreme that it’s no longer fun like shock horror.

i think movies like this get easily discounted because they’re non white and not in english, or maybe even just because theyre lower budget, netflix released, i don’t know. i think maybe for people who don’t watch a lot of foreign movies there is sometimes like a culture shock with certain trends in acting, directing, etc. that can be offputting if you’re not willing to be a bit open minded. just because it’s not what you’re used to doesn’t make it bad. not to say that anyone who didn’t like this or any other movie is wrong for that, it just might not be your cuppa, but i do worry that a whole lot of movies are getting under-watched and therefore under-recommended just because they’re not? what we’re used to? it’s bc of that cycle that i hadn’t heard of this until now. it’s too bad bc this is for sure one of the coolest horror movies i’ve seen in a long time.

The Night Comes for Us