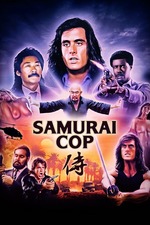 Matt Hannon as Joe Marshall a renegade cop with a mullet who goes by the nickname Samurai. He's brash, brutal, and badass and will stop at nothing to take down the ruthless Katana Gang. Al Capone is straight gangsta. Maniac Cop Robert Z'Dar's beard and ponytail. Who brings a gun to a karate fight? Speedy van. Some things feel real nice when they're warm and ready to go. Troy Cory? Awesome aim. Joe's chest hair. Sexy rider. Do you know anyone who speaks fluent Japanese? Omaha or Yamaha? I get those names mixed up all the time. Burned lips. Flirtatious nurse. Circumcision chit-chat. Dr. Death. Ned Stark moment. Why would you try to fuck with Robert Z'Dar? I'm in awe of Joe's mullet. The way everyone flubs their lines. Mr. Fujiyama's mustache. Officer Frank is as smooth as a can of Schlitz Malt Liquor Bull. I wonder if he auditioned for Empire Strikes Back? Happy waiter. Joe is the most insensitive politically incorrect samurai cop in the history of samurai cops. Bye-bye arm. Handcuff dance. Lion head. Samurai cops love to use baseball bats. Big bald Okamura. The way Joe's mullet flies in all directions when he's going all samurai cop on a motherfucker. Jessica Rabbit? Steamy fucky fuck. The way Robert Z'Dar kisses. Chicken thief. Eye reader? Joe's speedo. Ass info? Scissors of Death. Cooking grease burns. Happy Birthday fuck. These goons with Robert Z'Dar are some of the most bootleg baddies I've ever seen. Undercover cop wisdom. When the fat-fuck with the shotty tries to hide behind a tree. Every time someone gets shot they don't realize they're dead and they keep shooting. Joe's intense stare. Clever as fuck Frank. Sometimes there's a shit ton of blood when someone is shot and sometimes there's none. Joe's facial expressions. Eye gouge. Always honor the code motherfucker. Holy fuck! What an introduction to director Amir Shervan. This is one of the worst films ever made but I loved every second of it. All the ladies looked great naked. Robert Z'Dar is the motherfucker. Mr. Z'Dar is as scary and menacing as they come. This guy Frank is my new favorite sidekick. I adore mullets. JCVD has one of the best mullets ever in Hard Target, but Mr. Mullet Matt Hannon aka Samurai Cop has the most awesome mullet I've ever seen. He can't act worth a fuck, but his mullet is Oscar worthy. I'm speechless. A half-star film on my all-time favorites list. Now that is badass! Please watch this beautiful film.