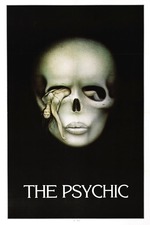 Too many people seem to only remember Fulci for his gore masterpieces but let me tell you: that man knew how to make a truly great giallo and, personally, I think this may be his best one.

A clairvoyant has a vision of murder and tries to find out who did it before they find her. I’m pretty sure this is in my top 5 gialli of all time although, admittedly, that’s a really hard list to try and make. I have noticed that even when people are familiar with Fulci’s giallo work, this one doesn’t seem to be quite as well known. Maybe it’s because it’s harder to find than others? I remember being totally fascinated by the VHS cover art for this when I was a kid so maybe that’s why I’m more familiar with it.

The story is great and Fulci’s direction succeeds in throwing you off course at several points. Even if you should figure out what’s going to happen, it’s all so well done that I can’t imagine you’d feel cheated. The performances are top-notch. Jennifer O’Neal is so absolutely beautiful, it’s hard to believe she was badly bullied as a child. I read earlier tonight that Marc Porel was addicted to heroin, which not only ended his career but I’m guessing contributed to his untimely death. That’s such a shame because he probably would have been wildly successful. I also have to say the music, especially the main theme, is awesome.

Plus, how brilliant is the original film title: Murder to the Tune of the Seven Notes in Black. Is that not THE best?

This is a definite must-see for any giallo or Fulci fan. If you’re both, it’s a total double-win. If you haven’t seen any of his work, this is certainly a great introduction. If you’re not a fan of Fulci’s gore films, give this a try because it definitely proves that he was capable of so much more than just those...although I may be a teensy bit biased because I love all of his films.