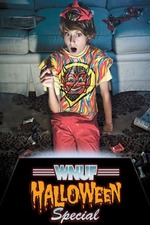 Basically like a watching a TV special recorded on a VHS tape and I mean that as a genuine compliment. The story itself isn’t that great, in fact it’s pretty fucking awful, but that’s not what you come to this for. You come to this as a kid who grew up in the 80’s watching this exact same shit while you sat on your decade old shag carpet eating tootsie pops or some Fruit Wrinkles (if you know you know) or nachos covered in Cheez Whiz. Maybe a bowl of Smurfberry Crunch. Some Pizzerias. Tato Skins.

The commercials are a dead ringer for the ones that used to be on local television. Especially the carpet stores, furniture stores, and monster truck rallies. That shit gave me a wave of nostalgia and I haven’t decided if it was delightfully intense or outright nauseating. Maybe a mix of both.

Gotta admit I was hoping for some horror along the lines of Ghostwatch, but that’s not at all what this was so if you’re expecting the same then shift gears. This is a 100% unashamed trip down memory lane. A love letter to all the 80’s kids and for that I’m thankful. I’ll never have to adjust the tracking on my VCR and that’s kind of a bummer in a way I can’t explain so I’m glad there are people out there who will deliberately insert tracking issues into a nostalgia filled Halloween themed movie to keep me reminded of the things I loved about being a kid.

Rise of the Scarecrows