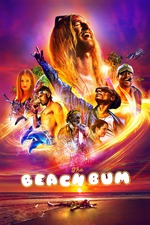 A gloriously dirty, tropical, and hilarious work of art.

Harmony Korine is one of my favorite directors ever, so it should come as no surprise that I loved this film. Obviously much more in the vein of Spring Breakers than it is something like Gummo, but this film is yet again presenting many questions to its audience, as well as showing them something that really nothing could prepare you for. I found this entire film to be extremely inquisitive on not only the purpose of life, but of art. In my mind, Korine was drawing a connection to the pursuit of artistic perfection within himself and Moondog to each other. Korine and Moondog both have not come out with any full-length works in quite some time, despite many people pestering him about it. Both men then proceed to essentially shitpost under the guise of art, and people praise him for them for it. Korine and Moondog only want to do things that make themselves happy, and wish to create without the "need" for a purpose behind what they are doing. This kind of stylized backhanded apology was also handled thematically in films such as The House That Jack Built, and it was honestly about time Korine made some comments on his own "meaningless and aimless" art that critics seem to loathe. You want pointless and fun? I'll show you pointless and fun!

And that is exactly what he did. Korine got everyone firing at all cylinders to create one of the most bizarre, pointless, fun, and downright hilarious films of all time. The cast was perfect for their respective roles, and I feel as though the deliberate choice of including McConaughey was yet another statement on what people think of artists based on solely what they've seen them in. Using bigger stars such as Zac Efron, Jonah Hill, and Martin Lawrence seemed to be the sort of "bait" to get people to watch this film under the guise of it being a structured corporate """comedy""", but were instead fed a spoonful of the most disjointed, vile, and self-aware scenarios comedy films have likely ever seen. Every scene seemed to have been taken from a barrel of unused takes that would never make the final cut, and the writing was either written in such a way that it did not feel like dialogue at ALL, or it was just setting up a vague playground in which these talented actors can all romp freely in. The stock music used over the funny funny time scenes was so infuriatingly hilarious, and the songs they used to purpose edit out or cut hard before it starts was hilariously uncomfortable as well. Everything played off of itself so naturally that I just couldn't take my eyes off the screen, or a smile off my face for that matter. Carefree, but not careless. Korine again, for the 6th time in a row, puts his audience through agony due to their own sick curiosity and expectations.

Moondog faces ZERO consequences for his actions, and even succeeds far more than anyone who is actually trying likely ever will. People love him for it. Why even try at anything anymore when you can just vibe out and have a good time and get to the same place as everyone else? Artists try so hard to create the perfect labor of love their art should be, but "untalented" directors such as Korine can make films that "don't amount to anything" yet succeeds more than you? What does that say about how we should treat each other and art?

Then, Harmony comes in with a big old sledgehammer and smashes this entire review to dust. Moondog said it himself, there is no point to "Beach Bum", I was just having a good time. Moondog is THE BEACH BUM. Ending a film with its opening title has never been so fantastic.
Immaculate art, entertains on all levels, metaphorical and literal. Absolute insanity-core storytelling and characters. 2019's first must-see film.