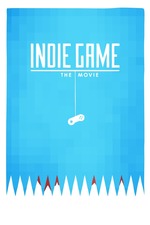 Never was the phrase ‘Kill Your Darlings’ more appropriate than here: put too much of yourself into your art and expect criticism to feel like a personal attack and start destroying your sanity.

Indie Game’s great because not only do you get to see a well-produced doc into the quieter, cheaper but no less creative side of the videogame industry, but you also see the impact on the lives of those who are trying to meet deadlines and deal with big business whilst retaining their individuality. The toll on their personal lives – as well as bank balances – is wince-inducing.

Phil Fish gets a lot of negative press for his public attitude, but he’s very much the victim here – someone who clearly struggles with some mental health issues; his game a complete and utter extension of himself. Phil obviously saw his game – Fez – as a love letter to gaming and as a relaxing experience; something that was a ‘thank you’ to the gaming community and designed to be a pleasurable alternative to mainstream output. He felt every single setback as a hammerblow; every netnerd criticism as a personal attack.

It’s good in retrospect to see how massive a success Fez has become (it's been a huge critical and commercial hit). He may be a difficult man to like on face value but he delivered something people genuinely adore and deserves all the plaudits he’s received (and much less of the opprobrium).