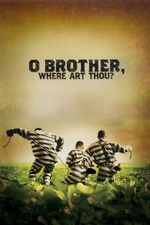 An absolute classic, and my personal favorite of the Coens's myriad of fine work. I don't know what it is about it, but it works so well. The performances from the entire cast - not the least of which is lead by the awesome trio of Clooney, Turturro, and Nelson - are completely solid, the period theming is stylish and appropriate, and the music is incredible. Not to mention, the blending of Homer's The Odyssey with this kind of story is oddly perfect. Not every detail of the period is exactly correct, but the look and feel of 1930s Mississippi is simply beautiful, due to the Coens's incredible writing/direction and Roger Deakins's exquisite cinematography (seriously, how did he not win for this?). It just shows that the classics can be applied to anything if you have enough imagination. In classic Coen fashion, the film is highly quotable and hilarious. Looking at this from a 2017 perspective, It's scary to see that the KKK stuff hasn't gone away yet, in spite of how much progress society has made since then. Being from the South myself, it's always nice to see my corner of America get some positive, accurate spotlight. I've always grown up with this film; I can remember my dad and I putting this and the soundtrack on all the time when I was a kid (I remember considering this one of my first "grown-up' films). "I Am a Man of Constant Sorrows" is basically in my blood as much as "Rocky Top" and "The Tennessee Waltz" are. What I'm trying to say is that this shaped a lot of my culture as a kid, as well as formed my taste for modern films, and it's a downright shame that this isn't talked about as much anymore. For fans of Homer, it's absolutely perfect as an adaptation, and for film fans, it's such a beauty, and for myself, it’s a piece of home I’ll always carry with me.