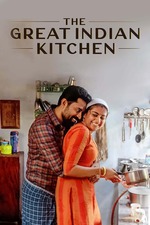 Everything, with the depiction of middle class south asian households as well as the internalization of the patriarchy, is brilliant! I could have never even imagined being in a place like hers. Religious bigots would pretty much eat cow shit before they think of women as humans.

I can also draw parallels from this film to Roma,
As well as parallels to a lot of people in my extended family. I never thought of it in such a manner but... I know a few women who live the lives of the protagonist. Initially, I thought everything about this film was so one dimensional but it's not, it's really all there was to her life, or all there was allowed to be.