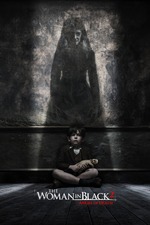 “TIde’s coming in. We need to hurry!”

I began watching The Woman in Black 2 with absolutely no expectations. None whatsoever. Which, now that I think of it, is the best way to watch a film.

What I found was a beautifully shot film with some exquisite sets and locales…a moody and atmospheric film that truly captivated me.

Sure, the film includes a lot of jump scares. Like, a whole lot. But there are a handful that are staged so well that I can’t in good faith call them cheap. The film balances them with well-crafted storytelling and fine performances by the lead cast.