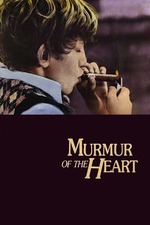 Murmur of the Heart

An inevitable shift happens at some point midway through a young man’s upbringing—as sudden as it is revelatory, his blissful innocence is irreversibly dismantled with an introduction to the world of desire. Everything begins to revolve around sex, and he starts to explore his body in ways he never has before. I’m not sure that I’ve seen any film tackle that shift in a more authentic manner than MURMUR OF THE HEART (Malle’s statements that much of the film is actually autobiographical is surely no surprise for this reason). Although the journey for Laurent to become his own man may be brought on partly by disdain for his father figure, or by compliance with the coercive forces of his brothers who believe they know best, the central evolution here (and what makes it so resonant, in my eyes at least) is that of a young man singlehandedly either succumbing to the environment he occupies and choosing to embrace his desires, or holding back and doing what he is told he’s supposed to be doing. Following the first dipping of his toes into the waters of sensuality, Laurent has the option to do what’s expected of him at any time, but it’s making the decision to break away from that on his own that makes this such triumphant look into the formation of masculine nature. Malle even makes his eventual indulgence in depravity here out to be understandable and poignant—ushering one not to feel the immediate and rational disgust they would be feeling had a lesser filmmaker portrayed the same thing, but deep-rooted compassion in its place: a feat only a master filmmaker could pull off. Backdrop all of this with a jazz soundtrack as turbulent and spontaneous as the life of our protagonist, and close it a finale that’s sickeningly hilarious enough to cement it in its viewer’s memories forever and you have one of the most extraordinary depictions of coming-of-age cinema has given us.