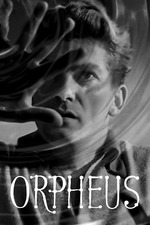 Was completely unfamiliar with the myth of Orpheus and Eurydice upon which this based is prior to my initial viewing, though the more I read into the source material, the more I feel that it’d have been entirely unnecessary to attempt to make myself familiar with it in the first place. It seems to me that Cocteau’s interpretation here strays so much further away from the romantic interpretations a more straightforward adaptation of the myth would entail, instead making the choice to place his crosshairs on creating a version of Orpheus motivated more by his fixation with death as opposed to saving his wife from the underworld (thereby creating thematic room for Cocteau to wrestle with his own obsessions). It’s no unusual occurrence for filmmakers to use the artists in their work as vessels to cast their own psyche onto celluloid — e.g. PASOLINI, MISHIMA, etc. — but here it’s made even more apparent through his frequent use of mirrors: after all, it would only make sense in a work as self-reflexive as this is. Aside from its more compelling thematics however, the main draw of ORPHEUS in my eyes would have to be the eerily alluring look of the whole thing—saw this on my laptop and knew immediately that it wouldn’t be done its proper justice until I got on blu-ray. Visually, this mostly functions as a shadowy and atmospheric (yet slightly expressionless) dreamscape, though periodically there are clear spouts of striking imagery—namely Cocteau’s aforementioned use of mirrors as a central motif (key line here: “look in a mirror all your life and you’ll see death at work”). The extremely trippy feel throughout ORPHEUS he manages to cultivate with ultimately very little — some reverse motion, a set flipped on its side, and a little bit of rear projection work are pretty much the extent to which he pushes things — is quite the feat indeed, and contributes heavily to what makes this such an absorbing formal exercise overall. It’s films like this that give me even more reason to seek out all of stark beauty to found in the cinema of the black and white era, as these days you’d be hard pressed to find a film so cleverly restrained in its elegance.