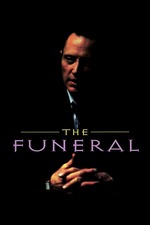 Gangster cinema, de-romanticized. With THE FUNERAL, Ferrara strips away all of the glamour of popular genre depictions (i.e. GOODFELLAS), instead opting for an unadorned look into cold reality. He makes incredible use of his formal versatility here: the period work is great enough on its own, but what’s more notable is the way its bleak presentation perfectly complements Ferrara’s directorial goal—there’s no vivid color palate or vibrant camerawork to soften the heavy blow of the film’s themes, as it instead makes the wise choice of writhing in our characters’ desolation (this can be seen most starkly exemplified in car interiors after dark; absolutely miserable). Accentuated by some fantastic performances from Penn and Gallo, writer Nick St. John paints a portrait of men who’s violent mob lifestyle has pushed them to dehumanizing proportions: their constant emotional constraint fashions them ticking time bombs, embodying the darkest branches of masculine nature. What’s most surprising about THE FUNERAL though, is that for a runtime of under one hundred minutes, it explores these themes of stoicism and anguish in such detail—to the point where Scorsese’s recent attempt at emulating Abel’s work here at greater length seems almost pointless in retrospect...although to cut him some slack, it’s very difficult to blame someone for working off a film as remarkable as this. “They're criminals, and there's absolutely nothing romantic about it.”